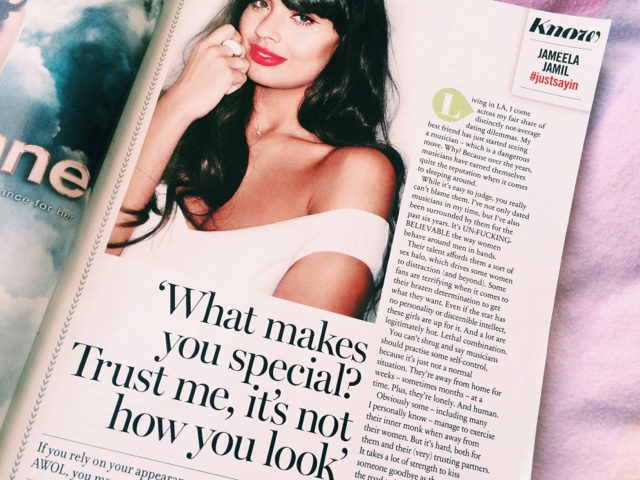 In 2015, it’s safe to say we live in a society seemingly driven by appearance. And while it’s easy to say “I don’t care about how I look” it’s not so simple to put into practice; I mean everyone goes to the shop and buys clothes. I doubt I’m alone in saying the one time to throw on some tracksuit trousers and a sweatshirt is the one day I see the world, and her sister, in the shop. But just because we live in an image-driven culture doesn’t mean looks alone make you standout.

So what’s in the Cosmo feature that makes it worthy for Feature Friday (FF)? My answer is reality, and that is definitely worth a FF. In an article that’s only four columns long, Jameela Jamil explains how it’s “UN-FUCKING-BELIEVABLE the way women behave around men in bands.” But it’s not just bands. At some point, a certain level of expectation for how women should look was created, and today’s generation will spend their lives looking in the mirror picking out faults within themselves.

Of course it’s important to be able to feel comfortable with yourself and have self-confidence, but it’s equally important to make sure you can still recognise and identify yourself when you’re tweaking.

“It’s not that my looks wouldn’t be my USP. It’s that they shouldn’t be.”

Has our preoccupation with appearance become an obsessive compulsion? Self-confidence is one thing but being comfortable with who you are is another, and many people visit salons and spas to get pampered to feel amazing. But has plastic surgery also become ‘the norm’ in the 21st century? Some people can spends hundreds, and even thousands, trying to achieve a look that they deem perfect without thinking twice because they want it and ‘she had it done’ and not because they truly believe they need it.

At the end of the day, look good and feel good for you first and deal with other people later.

I’ve been adulting for a year!